Compared to Windows, most Linux distros are generally lighter on system resources, making them better suited for computers with older-gen hardware. However, the latest versions of popular distros, like Ubuntu and Mint, feature highly-customizable desktop environments that work best with modern GPUs and high-end hardware. And this is where the best lightweight Linux distros step in and breathe a new life into your aging computers. They are designed to primarily run on older computers or low-power devices, such as the Raspberry Pi and other similar single-board systems.

The best lightweight Linux distros still provide users with a modern computing experience, even on older computers and devices with low-end hardware. They retain many features that make Linux such a versatile operating system while cutting out the bloat that would otherwise make these distros unsuitable for low-end machines. So without any further delay, here are the best lightweight Linux distros you can use to breathe life back into your old computers.

One of the all-time favorite lightweight Linux distros, Puppy Linux, is a Unix-like operating system primarily meant for netbooks, older systems, and Live CD. The OS can run from RAM, with the latest version taking up barely about 300MB of space on 32-bit systems (and 600MB on 64-bit PCs). Official system requirements for Puppy Linux include a 600MHz processor and 256MB of RAM, which means even PCs from the late 1990s should be able to run this without any issues.

Puppy Linux isn’t based on another full-fledged distro but can be built from packages of distributions such as Slackware and Ubuntu. The choice of your binaries determines the availability of additional packages. It is user-friendly and can be live-booted using a CD, DVD, or USB flash drive. And to maintain its lightweight nature, Puppy Linux does not come with many pre-installed applications. That said, AbiWord, Gnumeric, and MPlayer are part of the default installation, along with a choice of lightweight web browsers and a utility for downloading other packages.

Linux Lite is not just one of the best lightweight distros but also one of the most user-friendly operating systems for new users, especially those migrating from Windows. It is based on Ubuntu LTS releases and comes with a whole host of popular and helpful applications. Minimum system requirements include a 1GHz processor, 768MB of RAM, 8GB of free storage space, and a VGA resolution (1024×768) screen. That makes it a relatively demanding option than some of the other distros on this list. 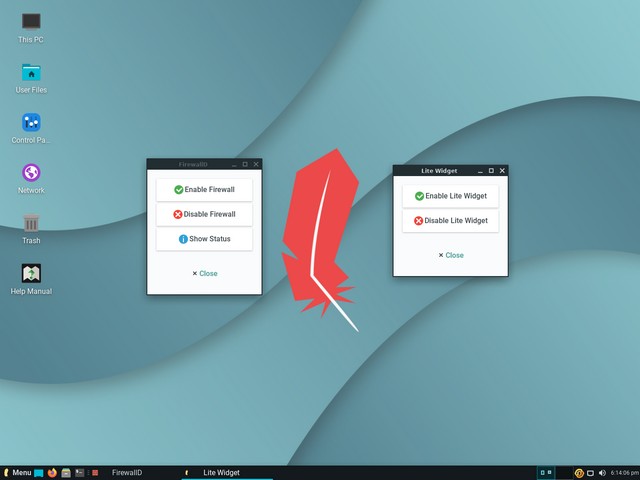 Linux Lite 5.0 comes with a whole host of new features to make it work out-of-the-box, including pre-installed LibreOffice, GIMP, Dropbox, VLC media player, and Firefox. It also offers users a better Linux desktop experience. Linux Lite also supports default UEFI boot mode, making it suitable for newer systems. However, it comes with one compromise. The recent versions of Linux Lite are not compatible with older, 32-bit systems. Still, given its versatility and ease-of-use, it is easily one of the best lightweight Linux distros for old computers.

Yet another Ubuntu-based lightweight Linux distro, Lubuntu, is for folks who want to experience Ubuntu on a barebones system. It is an official Ubuntu-based distro developed by Canonical and features the same software and repositories as its flagship stable-mate. Lubuntu provides you a simple but modern GUI and comes with a wide variety of applications, including Firefox, LibreOffice, VLC, Featherpad, Trojita, and more. 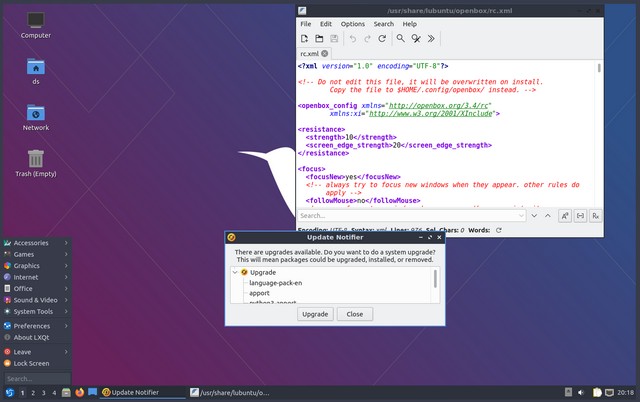 Lubuntu discontinued 32-bit support from version 18.10 but continues to offer a fast, lightweight desktop experience, even on weaker hardware. Minimum system requirements include Pentium 4 / Pentium M / AMD K8 or higher processor and 1GB of RAM. Note that Lubuntu 18.10 also moved from LXDE desktop to LXQt, but both are still more lightweight than XFCE. The latest version (Lubuntu 20.10), codenamed Groovy Gorilla, is the 19th release of LUbuntu and the fifth release with LXQt as the default desktop environment.

Bodhi Linux is an Ubuntu LTS-based lightweight release featuring Moksha Desktop, a continuation of Enlightenment 17 with additional features. It comes with a whole bunch of available software, thanks to the Ubuntu repo. Further, Bodhi Linux comes in four different editions, including Standard, Legacy, AppPack, and HWE. While most users will opt for the Standard or Legacy Edition (for 32-bit hardware), those looking for a 64-bit operating system with updated kernels and new hardware support should opt for the HWE edition. 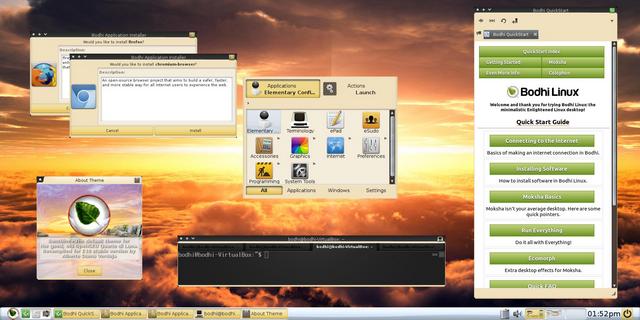 Minimum hardware requirements for Bodhi Linux include a 500MHz processor, 256MB of RAM, and 5GB of storage space, making it ideal for decades-old systems. However, the less-than-1GB ISO file means that it misses out on many essential pre-installed applications. That said, if you want a lightweight Linux distro with an attractive and modern desktop UI, Bodhi Linux is one of the first and foremost distros you should consider.

As the name tells, Tiny Core is not a turnkey desktop distribution, unlike most of the other distros on this list. Instead, it is just the core system on which users can add what they want to customize their OS experience. The developers offer three different x86 cores, including Core, TinyCore, and CorePlus. While Core is the base system with only a command-line interface for servers and appliances, TinyCore is the recommended option for desktops with a network connection. It includes the base Core system and X/GUI extensions for a dynamic FLTK/FLWM graphical desktop environment. 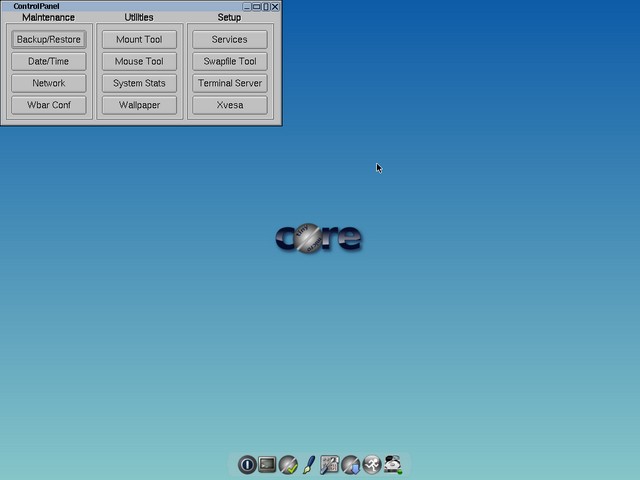 This is possibly the most lightweight Linux distro on our list, having the ability to run even on an i486DX paired with a meager 28MB of RAM for Core and 46MB for Tiny Core. That said, Tiny Core is not for newbies wanting to try out Linux for the first time. It offers only the Linux kernel and the root filesystem to go with it. That means users will have to know their way around the Linux ecosystem to be able to build all the tools on it. It is a great option for knowledgeable DIY folks whose top priority is minimal system requirements. For the rest, it’s best that you select something a little more mainstream.

Q4OS is a Debian-based lightweight Linux distro that uses the trimmed-down Trinity desktop environment. It comes with a set of dedicated utilities and specific optimizations, combined with a focus on making a productive system. It is equally suitable for newcomers, as well as Linux veterans. Although the default Q4OS installation doesn’t offer a full suite of applications, you get powerful tools to install apps and proprietary codecs based on your usage requirements. On relatively modern hardware, it also supports desktop effects. 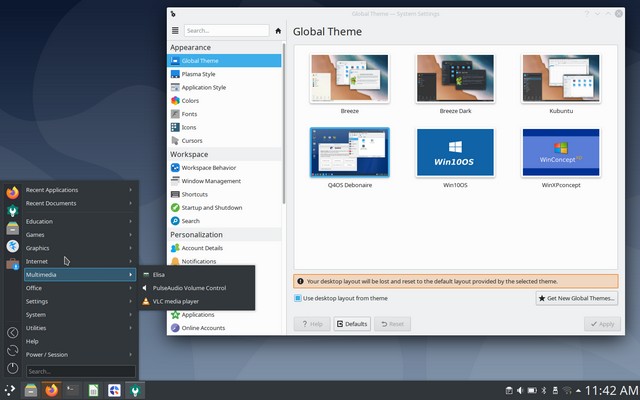 Unlike most mainstream Linux distros, Q4OS offers Trinity as a dedicated download option, right after the default Plasma desktop. The distro also comes with a Windows installer, which means you can install Q4OS on your Windows PC just like any other Windows application. This installer is compatible with Windows 10, 8, or 7 versions and can handle Secure Boot. Q4OS also offers native utilities, such as Desktop Profiler and Software Center, and installers for third-party applications with support for x86/32-bit, ARM architecture, and more.

Based on Debian, antiX is a fast, lightweight, and easy-to-install live CD distribution for x86-compatible systems. It ships without systemd and can be used as a fast-booting rescue CD on a USB flash drive. The OS comes in four flavors, including a full distro (1.1GB), a base distro (700MB), a core distro (350MB), and a net distro (150MB). While experienced users who want total control over their system will fancy the latter two versions, the first two are for first-time Linux users. 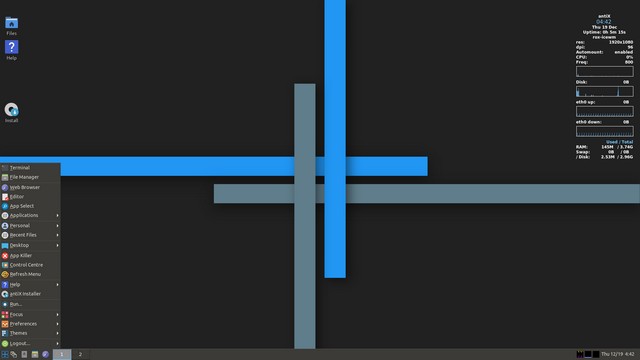 Minimum system requirements for antiX include a PIII processor paired with 256MB of RAM and 4GB of hard disk space. The latest antiX release is version 19.3 Manolis Glezos, which rolled out late last year. To make the most of the antiX live system, the developers recommend using the antiX/MX live USB maker to create the CD. Windows users should ideally use Rufus, but you can check out our list of Rufus alternatives if you are so inclined.

Ubuntu MATE is an official Canonical distro that incorporates the core Ubuntu OS and adds the MATE desktop on top. That makes for a stable, easy-to-use operating system with a configurable desktop environment. It is often seen as an Ubuntu alternative for computers not powerful enough to run a composited desktop. It is, however, not nearly as lightweight a Linux distro as some of the other options on this list. That means you will need a relatively more capable device to run this OS. The minimum hardware requirements include a 1GHz processor, 1GB of RAM, 8GB of free disk space, and a display with at least 1024×768 resolution. 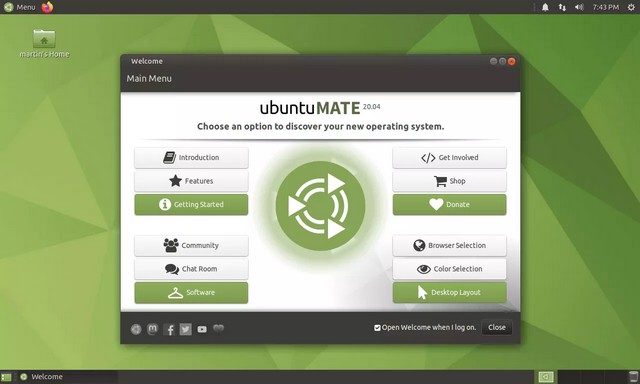 The latest release of Ubuntu MATE is based on Ubuntu 20.04 LTS Focal Fossa. It brings along tons of new features, including multiple color theme variations, a one-click install, experimental ZFS, and a GameMode from Feral Interactive. The OS is for users who want to experience the beauty and customization of Linux with easy installation and a hassle-free experience. To that effect, it is one of the best lightweight Linux distros that’s available for a wide range of devices, including the Raspberry Pi.

Manjaro is a Linux-based open-source operating system that comes with the Arch-based fast and lightweight Xfce experience. According to the developers, it provides users “all the benefits of cutting-edge software combined with a focus on getting started quickly, [as well as] automated tools to require less manual intervention.” The OS allows users to run many popular Windows applications using Wine, PlayOnLinux, or Proton via Steam. 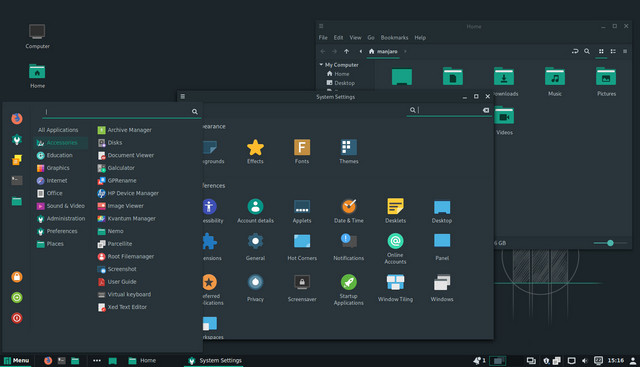 Manjaro is only available for 64-bit systems, with the developers officially supporting XFCE, KDE, and Gnome editions. Other flavors, including editions for 32-bit systems, are maintained by the community. Minimum hardware requirements for Manjaro XFCE include a 1GHz processor and 1GB of RAM, making it one of the best lightweight Linux distros on the market.

Even though Absolute Linux is undoubtedly one of the best lightweight distros for desktops, it doesn’t always get the attention it deserves. Based on Slackware, this 64-bit OS comes pre-installed with Firefox, LibreOffice, Inkscape, GIMP, Google Earth, Calibre, and more. It is version-compatible with Slackware, which means you can use almost any package from the same version of Slack on Absolute. Development libraries (headers) for everything come with the default installation, making it possible to code/ build almost anything from the source. 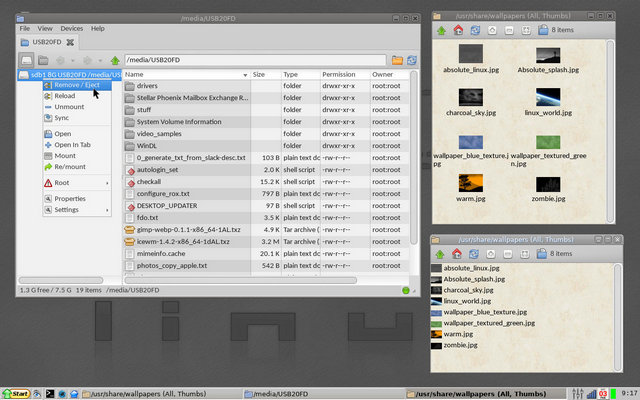 Absolute Linux is one of the least resource-intensive distros on this list, thanks in part to the lightweight IceWM window manager. It also includes many convenient custom scripts and utilities for easy installation, configuration, and maintenance. Do note that there’s no Live mode, but experienced users can add and remove packages from the install media to create a customized distro of their own.

Use the Best Lightweight Linux Distros on Your Aging PC

Some of the most popular lightweight Linus distros, like Peppermint OS and DSL, are not on this list because they are no longer under active development. While they still work alright, we’ve refrained from including them in this list because of the lack of bug fixes and security updates for years. Either way, if you have an old computer lying around at home, give it a new lease on life with any of the aforementioned lightweight Linux distros. Do let us know which one you chose and why in the comments below.