Chetanhttps://thcb.in
Whenever you enter a laptop marketplace, you will notice most of the selection comprises laptops with either intel chips or a combination of Intel processors and NVIDIA graphics cards. It’s a shame how AMD laptops rarely find their way into the showcases. Well, we expect the situation to change very soon, as AMD Ryzen laptops, in particular, are slowly outclassing their Intel counterparts.

More and more manufacturers are giving AMD a chance. Ryzen 5000 series is in hot demand these days. Plus, their multi-year advantage on 7 nm chips has been pretty tough for Intel to beat. However, Intel is trying its best with 11th gen Tiger Lake processors. ADM laptops offer an excellent value package, particularly on laptops without dedicated graphics cards.

Below are our top picks for the best AMD Powered laptops. These notebooks provide exceptional battery life and performance at a usually lower price point.

Our top pick for AMD Ryzen Laptops is HP’s mid-range convertible. It boasts a slim profile and snappy performance thanks to AMD Ryzen 5 4500U processing chip. When coupled with a glossy display that comes without any noticeable bezels, you get a 2020 model that’s more premium than its price.

While there are several configurations of the HP Envy 360 laptop, this one comes with a 15.6 inches display, up to 4GHz processor (boosted), 8GB Memory, 256GB SSD, and a backlit keypad. Performance is snappy due to The Ryzen 5-4500U chip, which easily outperforms Intel Core i7-1065G7. RAM comes soldered on, though. Which means you cannot upgrade this version.

There’s a lot to like about this model. The touch screen is pretty responsive, and it folds easily. The fingerprint reader unlocks the system fast. The camera is good for a laptop in this range. The keypad is easier to type than you would expect, considering it has a 10 key off to the side. The speakers are average for the form factor.

The only downside we see of this model is the 1080 display. But let’s get real folks. For a laptop that comes under $1000 in a post-COVID world, it’s not much of a con. If you’re a light to moderate user who wants a laptop for web surfing, emails, MS Office, Youtube, and maybe some light productivity work like photo editing, this model will work wonders. 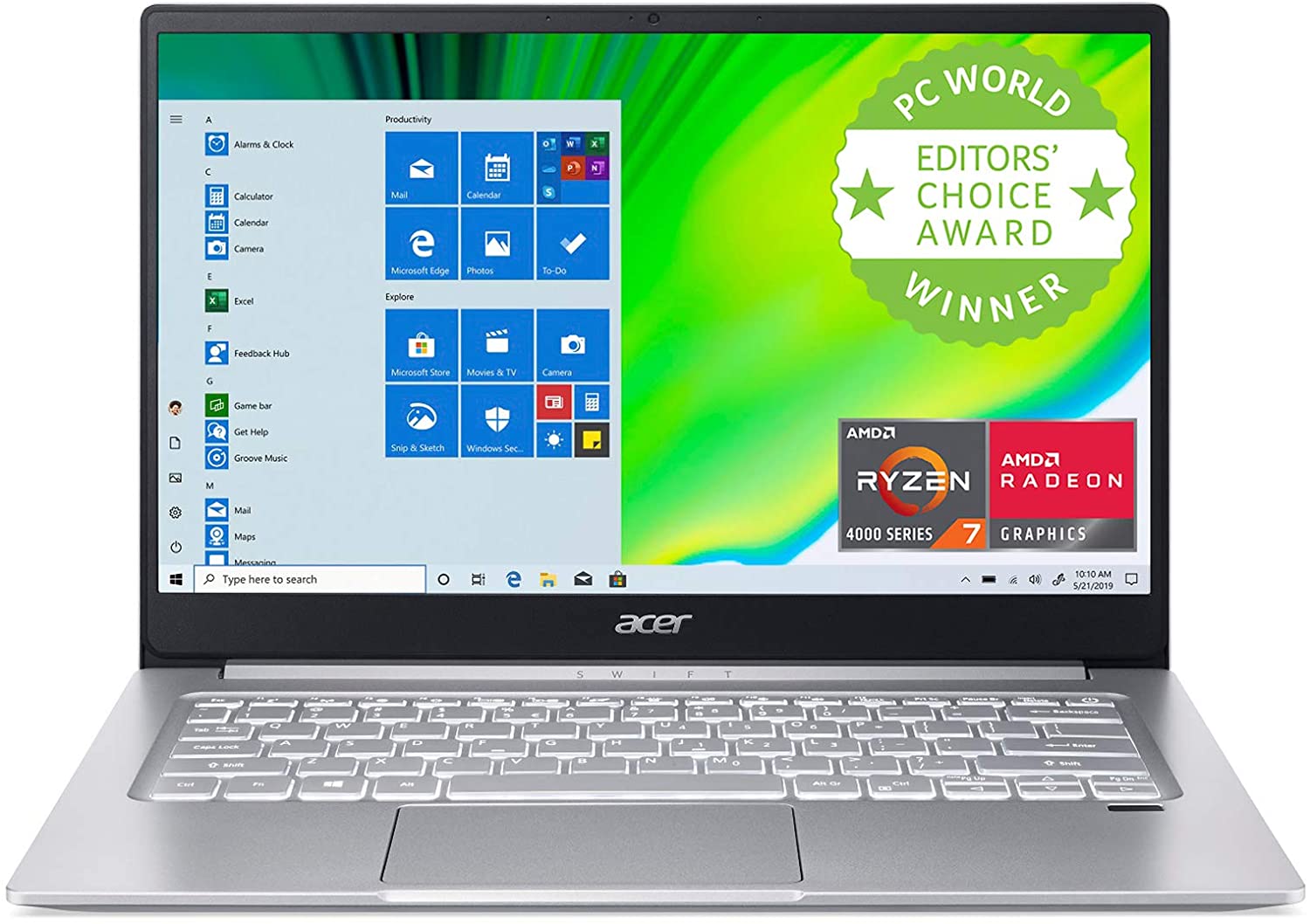 A Ryzen 7 4700U processor can make everything better. After all, it is one reason this under $700 ultrathin lappy goes toe to toe with $2000 monsters Dell XPS 13 and Macbook Pro. It is also designed for maximum portability. Therefore if you are a frequent traveler looking for a Herculean ultrabook that won’t empty your wallets, look no further.

The Acer Swift 3 conceals an AMD Ryzen 7 4700U Octa-Core Mobile Processor. You can overclock it up to 4.1 GHz to maximize productivity. It has 8GB LPDDR4 RAM and a 512GB PCIe NVMe SSD for storage. There’s also a built-in fingerprint scanner for additional security. It also has multiple ports for your connectivity needs.

However, a laptop as affordable as this one is sure to make some tradeoffs. And the biggest one is its lackluster display. If you want a bright, colorful display, look elsewhere. It only provides 1080 resolution with a 16:9 aspect ratio. While Acer claims a battery life of 11.5 hours, practically, you should be able to get at least 7-8 hours for productivity tasks.

All in all, Acer Swift 3 whizzes past its Intel counterparts as well as some premium ones in performance. And if you are not too finicky about display brightness, you won’t get a better value elsewhere. 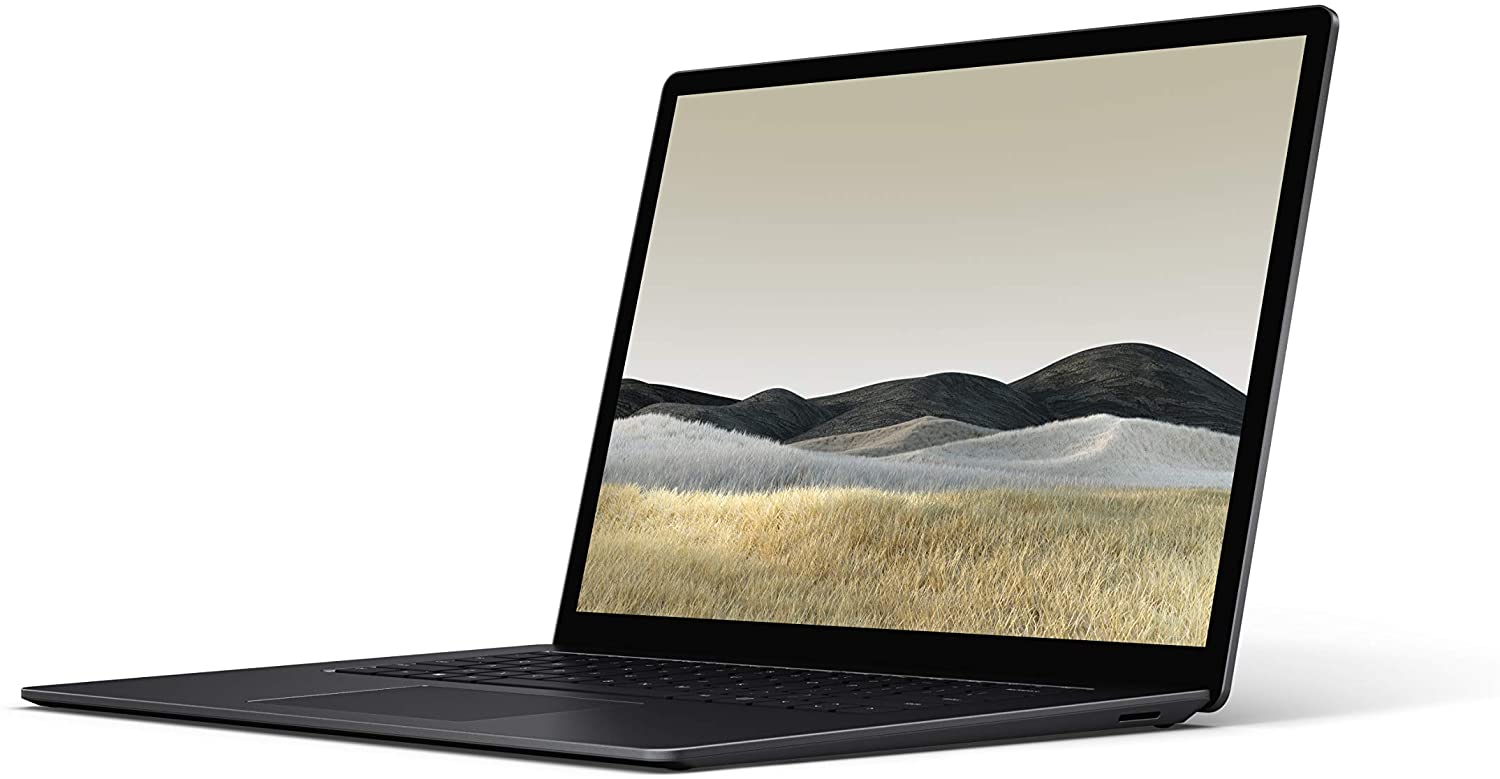 While you may not have heard about the combination of a Surface notebook with AMD’s Ryzen processing chip, that’s exactly what Microsoft did the previous year. The Surface Laptop 3 comes with either Ryzen 5 3580U or a Ryzen 7 3780U processor options. Sure, it’s a familiar package in new dimensions, but AMD’s power makes it worth checking out.

The Surface Laptop 3 packs an up to Up to 32GB of DDR4 2,400MHz (non-upgradable) RAM along with an Up to 1TB M.2 NVME SSD for storage. There is a USB-C, USB-A, 3.5mm headphone jack, and Microsoft’s standard Surface Connect port for better connectivity among a plethora of ports. The entire package is very lightweight at just 3.4 pounds.

The chassis is aluminum, and build quality is what you would expect from Microsoft. The 15 inches touch screen is excellent. It’s bright, with great viewing angles, and it has the Surface’s signature 3:2 aspect ratio. But, our favorite part is its keyboard. It’s the most comfortable keyboard I’ve ever typed on, thanks to excellent spacing, key travel, and feedback.

Nevertheless, a lack of Thunderbolt 3 support limits its performance. Plus, a bigger display means the laptop eats up battery pretty fast. That said, the Surface Laptop 3 one of the premium AMD laptops for modern workspaces. If you want a laptop for productivity, writing, and similar work-related tasks, Microsoft’s Surface Laptop 3 is an excellent option. 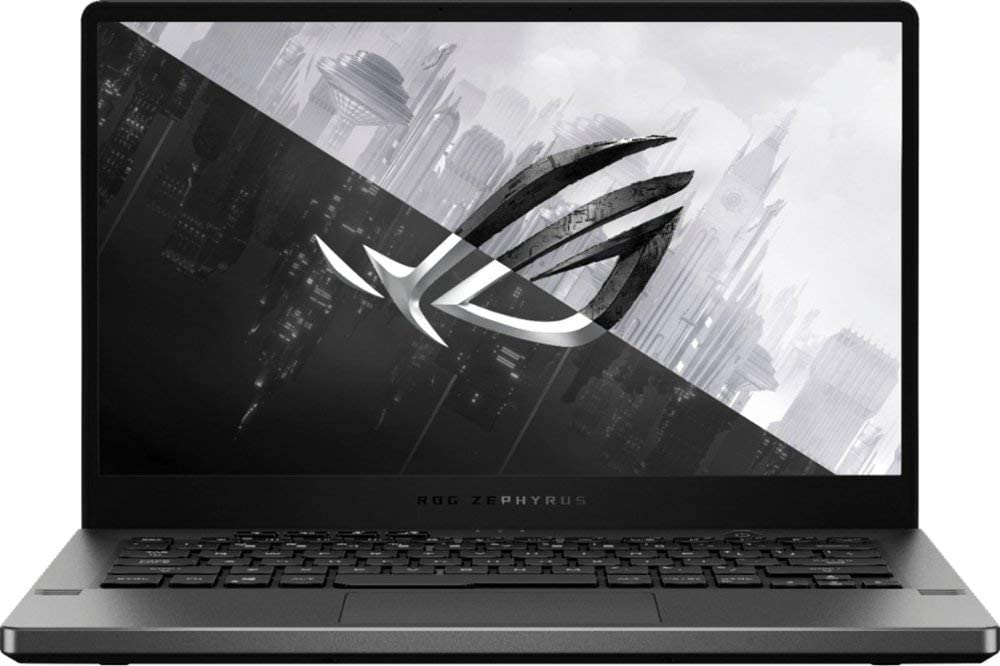 In fourth place, we have one of the Ryzen 4000 series’s first laptops to hit the market – ASUS ROG Zephyrus G14. This Ryzen 7 VR Ready machine is the smallest Zephyrus gaming laptop Asus has ever come up with. What’s more, it’s also one of the few 14 inches AMD Ryzen laptops to pair an H-series processing chip with a discrete GPU. Cool, right?

The most impressive about this model is that Asus has somehow crammed a 4900HS and a GeForce GTX 1650 into a 14-inch notebook that weighs just over 3.8 pounds. It also has 8GB of RAM, a 1TB SSD, and a 120Hz display. It’s unusual to see such powerful hardware in such a small chassis. Also, the LED panel on the lid adds some extra oomph.

Its battery life is decent, but of course, it depends on your usage as well. Make sure you keep the software up to date for optimum battery performance. Lastly, it comes with an assortment of ports. There’s an HDMI, a USB Type-C, two USB Type-A, a USB Type-C 3.2 with Power Delivery, a Display Port and G-Sync, and an x Audio Jack. No Thunderbolt C, though.

However, its fan runs a bit loud. So, if you are picky about fan noise, go for any other alternative. Overall, ASUS ROG Zephyrus G14 is a mean little machine that packs quite a punch. It’s a good budget gaming laptop that should play some of the AAA titles on low settings. 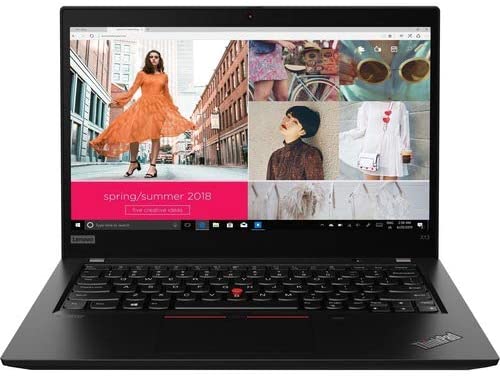 Lenovo’s Ryzen 5 Pro-based ThinkPad X13 is a well-thought-out, perky alternative to the company’s ultra-deluxe X1 Carbon. You can use it for business, productivity, or even light gaming!

The laptop itself is sturdy, packs extra keys in the keypad, and has enough maximum connectivity ports. We also appreciate the touchscreen and multiple mouse offerings, even if the combination trackpad and TrackPoint takes some time to get used to. This is the kind of laptop you can dock in tight spaces.

But we do have a complaint. For a laptop that feels so premium, the design feels dated. Even if it comes in at around a thousand dollars, we hope Lenovo had gone with smaller bezels around the display.

So, what separates AMD Laptops from one another and competition? Of course, there are usual considerations like CPU, RAM, SSD, display, and the number of ports for connectivity. However, we are looking at important characteristics of AMD-powered laptops you should consider before settling on one.

If you are confused about the AMD Ryzen processor series, below is a quick breakdown for your convenience:

• Threadripper: Up to 64-core processors

Within each of these brackets, the processors are titled by their model number. As a rule of thumb, the higher the model number, the more powerful the CPU.

AMD has divided its recent releases into two categories. The first is the H series laptops that concentrate on gamers and content-creating professionals. These are a bit bulky and weigh considerably more than others. The second is the U-Series laptops, intended for powering ultrathin premium devices with optimum performance and efficiency. These machines appeal to working professionals with frequent travel needs.

The latest AMD 4000 series laptops come with pre-built Radeon graphics for better performance. In fact, they provide almost double the energy efficiency of the previous generations. They offer quicker system shut down and startup as well as lower browser load time. Thus bringing across the board improvements in multitasking performance.

So, which one of these AMD Ryzen Laptops do you think suits your needs? Both HP and Acer lead the market at the moment, offering quality AMD laptops for different needs and budgets. ASUS and Dell are not far behind with their unique features like cinema-grade audio-video quality and excellent portability. Microsoft’s bout with Surface Laptop 3 is just a beginning. With their upcoming Surface Laptop 4 incorporating an AMD processor, this collaboration will only grow in the future.

Redmi, Mi smartphones get extended warranty due to COVID-19