Poco just recently launched new phones in India, but both of them don’t fall under the Poco F series. It seems that those waiting for the successor to the Poco F1 will have to wait a little longer. The company itself has confirmed that it is working to bring a true successor to the phone. While this will take time, the brand has launched Poco X3 to woo its customers. It is a sequel to the Poco X2 and is currently one of the best mid-range phones that you can get in the Rs 20,000 smartphone segment. But, don’t get too excited as every phone has some shortcomings too. Read our Poco X3 review to know more about is this the perfect phone that you have been looking for, or a few shortcomings won’t be an issue for you. Also Read – Flipkart Big Billion Days sale: Poco phones to receive price cut of up to Rs 1,000

The Poco X2 offered a beautiful design and the same is also the case with its successor. I liked the fact that the company doesn’t just follow the same design blueprint for every phone. A different design not only makes it look unique and refreshing, but also differentiates it from other devices in the market. The dual-textured back and the iridescent light when you look at the phone from different angles, make it look stunning. The device is very well built and one will feel like this is a high-end premium phone and not a budget one. Also Read – Poco C3 with entry-level price, triple-rear camera launched in India

While the X2 features a glass rear panel, the new phone has a plastic build. This is not at all downgrading and the Poco X3 doesn’t have a plasticky feel. Having a plastic back means that you don’t need to worry about it breaking if you accidentally drop it. The company ships a good quality case with the device, so you don’t have to worry about anything. The build quality is great and better than some of the phones in the market. Poco hasn’t compromised in any area. The device even supports an IP53 rating for protection against dust and a few water splashes.

The only issue is it feels quite heavy and carrying it around with a case will feel like a burden. But, you will get used to the heaviness after using the device for a few weeks. At the back, note that you get four cameras and not five. At first glance, you will easily be fooled by the back camera design as by just seeing at it you get the impression that there are five sensors. The glossy back panel has a camera bump as well, which is not unusual. If you have any issues, the bundled case will balance it out. There is a side-mounted fingerprint sensor, which is always a better implementation than having it at the rear. While the position of it is perfect to unlock the phone, it was a bit hard to reach the volume button, which is placed above the power button. Like the Xiaomi phones, here too you get an IR blaster, which is a good addition and could be quite useful to control home devices. When you keep the phone on charge, one will notice a very tiny white LED light on the upper speaker grille.

Similar to the Poco X2, you get a big 6.67-inch screen with a tall 20:9 aspect ratio. After reading this, you might have guessed how big the display is. Having a huge screen is great for media consumption, but one-hand usage becomes a little cumbersome. The panel supports 120Hz refresh rate for slightly smoother transitions. One can switch to 60Hz display option to save a certain amount of battery. The screen is vivid and sharp enough. It is visible in harsh sunlight too. The viewing angles are above average, and the panel is protected by Corning Gorilla Glass 5, which is nice. We were using the dark mode, which is not only easy on the eyes, but also helps make the punch-hole cut out unnoticeable. The tiny circular notch is only visible when you open any app without dark mode. Moving on, the Poco X3 draws power from Qualcomm’s new Snapdragon 732G chipset. In our usage, we witnessed close to no stutters and lag while using the device as our daily driver. The multitasking on this device is good. Though, you will have to wait for a few seconds when the handset is launching an app for the first time. You can play some casual or heavy titles on the new Poco X3. We tried Call of Duty and Asphalt 9, and witnessed almost zero stutters and the overall gaming experience was fine. After playing the games for 30 minutes, it didn’t get hot which is great. All-in-all, you will mostly get a satisfying experience for the base price.

With the Poco X3, the brand is offering stereo speakers. They sound very loud and are solid for gaming or for watching movies. It is better to keep the volume below 80 for a good listening experience. Additionally, when you push up the volume level to 100 percent and watch a video, the speakers vibrate the phone’s back panel to offer you a much real experience. The smartphone ships with Android 10 out of the box, instead of Android 11. Phones like Vivo V20 and OnePlus Nord ship with the latest Android OS out of the box. While the user interface is not as optimized as Samsung’s OneUI for one-hand usage, the Poco X3 offered a smooth experience. But, the issue is the device comes pre-installed with a lot of apps. Some of these can be uninstalled, which gives a sense of relief. The problem with having a lot of pre-installed apps is you don’t get full storage space out of the box and some of them even send unnecessary notifications. These include Xiaomi’s “GetApps” app, and a short video-making app called Zili. It is advisable to check the storage section in the settings before buying the base 64GB variant. I would like to mentioned we witnessed no ads in the UI.

As far as the battery capacity is concerned, the Poco X3 comes with a whopping 6,000mAh battery, similar to Samsung Galaxy M series phones. If your usage is light, then you should easily get around two days of battery life. With heavy usage, do not expect the device to remain alive for more than a day. The company offers a 33W charger, which takes less than two hours to fully charge from zero to 100 percent. The Poco X3 has a total of five cameras. At the back, you get a 64-megapixel primary Sony IMX682 sensor. One will find the same sensor on the Samsung Galaxy M51, which is priced at Rs 24,999. The setup also includes a 13-megapixel sensor with a 119-degree wide-angle lens, a 2-megapixel depth sensor with an f/2.4 lens, and a 2-megapixel macro shooter. For selfies, there is a 20-megapixel sensor with an f/2.2 lens. Unlike some of the phones, the Poco X3 offers a lot of photography features like long exposure, clone, slow-motion, front and back in one frame, short video, movie frame, Time burst, and more. You also get the usual portrait and night modes. Having an array of options is just great when you are in the mood to have some fun during photography sessions.

However, photos taken with the Poco X3 were a mixed bag. In daylight, some of the photos came out quite well with lively colors. Strangely, we got better photos without 64-megapixel mode. The dynamic range, sharpness, and details are much better with the default camera mode. This could be the reason why Poco has hidden the 64-megapixel camera mode in some other section. With the 64-megapixel mode, the details seem to be a bit lost and some sort of grain is also noticeable when you zoom in the shot. For better shots, you need to turn on both AI and HDR mode, but this is not the case for all the scenarios. It is important to note that you will get good shots as long as there is good natural light. 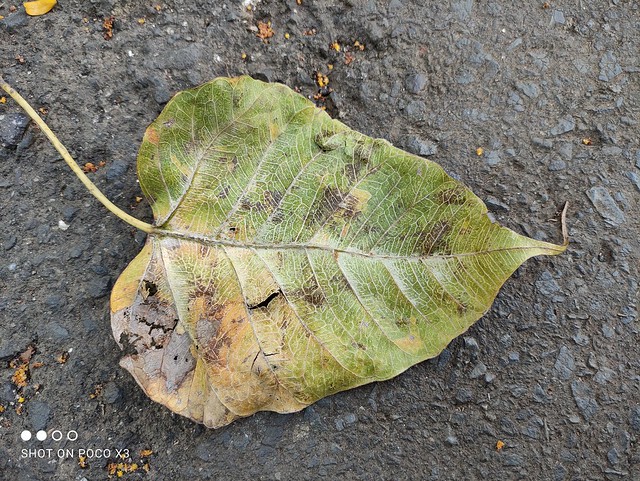 Also, there isn’t much of a difference between HDR and non-HDR shots. The company has added a Pro Color mode, which works just like Realme’s Croma Boost feature. But, you naturally get vibrant colors, so this will only benefit you when you want the camera to retain more colors.

If you look at the portrait shots in the below album, the Poco X3 did a good job with both human and non-human subjects. We got quite a natural-looking depth of field. I liked the fact that you can adjust the background blur, beauty mode, and even add studio lighting before clicking an image. These options are also available in the Gallery, which is great. The edge detection and details are well preserved, which some of the phones are unable to do that in the Rs 20,000 segment. In one of the portrait shots, the sun is in the background, the device still managed to offer a good enough shot. The camera captured the details, color tone, and sharpness impressively well.

Moving ahead, the wide-angle camera takes average photos, but we got detailed and natural-looking closeup shots. The only thing is the images could have been sharper. I really liked the clone feature. It is fun and very cool. The feature creates and captures virtual clones in a picture. As for the selfies, we feel that the output was not great and the skin tone seemed a little burned. At night, we got much better photos with night mode and above average shots with regular photo mode.

Poco X3: Should you buy it?

The Poco X3 comes with a starting price of Rs 16,999 in India. It is one of the best phones in India under Rs 20,000. You get a robust build quality, good battery life, and stereo speakers. We do feel the selfie camera is above average, but the rear cameras can offer you some great shots. As per our testing, you won’t have any issues as far as general performance is concerned.