Grep with the Line Number in Output – Linux Hint

Chetanhttps://thcb.in
Global regular expression print is a versatile utility that searches plain text in the system with different regular expressions. We can perform many operations with the help of Grep; we can explore in files, display line number as output, and how to ignore blank spaces, and use Grep recursively. Grep with the line number displays the line number of relevant text present in the file. This function is accomplished with the help of –n. From the page of Grep, we can easily describe different commands.

To achieve this current goal of obtaining a specific line number of the text, we must have a system to run commands on it which is the Linux operating system. Linux is installed and configured on the virtual machine. After providing a username and password, you will be able to access the applications.

The Line Number for Matching a Word

Generically when we use the Grep command, after the Grep keyword, the word that has to be explored is written and followed by the filename. But, by getting the line number, we will add -n in our command.

Here “is” is the word that is to be explored. The starting line number shows that the related file contains the word in different lines; each line has a highlighted word that shows the matching line to the relevant search.

The Line Number of the Whole Text in the File

The line number of every line in the file has shown by using a particular command. It not only shows the text but also covers the blank spaces and mentions their line numbers too. The numbers are shown on the left side of the output.

Fileb.txt is a filename. Whereas n is for the line numbers, and l shows the filename only. In case we have searched a specific word in any file, it will only show the filenames.

Concurrent to the previous example, here are (except for free space), which are special characters that are mentioned. They are also shown and read by the command to display the line number. Unlike the first example of the article, this simple command shows the line’s number exactly how it is present in the file. As there is no limitation of search declares in command.

To get only the line numbers of data in the respective file, we can easily follow the below command.

The first half command before the operator is understandable because we have discussed earlier in this article. Cut –d is used to cut the command, which means to suppress the display of text in the files.

Provide Output in a Single Line

Following the command above, the output is display on a single line. It removes the extra space between the two lines and only shows the line number mentioned in the previous commands.

The right portion of the command shows that how the output is displayed. The cut is used to cut the command. Whereas second “|” is applied for bringing to the same line.

Show Line Number of the String within the Subdirectory

In order to demonstrate the example on subdirectories, this command is used. It will search for the word “1000” present in files in this given directory. The file number is shown at the starting of the line on the left side of the output, showing the occurrence of 1000 in the prcd folder at 370 ties and in Webmin is 393 times.

This example is good in finding an error occurring chances in your system by checking and sorting particular words from the directory or subdirectory. The /etc/ describes the path of the directory having a folder of services.

Show according to a word in the file

As already described in the examples above, the word helps search the text inside the files or folder. Searched words will be written in inverted commas. On the very left side of the output, a line number is mentioned, showing the occurrence of the name on which line in a file. “6” shows that the word Aqsa is present on line 6 after line 3. Highlighting the specific word makes it easier for the user to understand this concept.

The output shows the whole string in the file, not only the single word present in the string, and it only highlights the given word.

It is an extension of all folders that are present. By specifying the extension name, we can show the relevant data, i.e., login detailed files.

Search in all Files

This command is used in searching the file in all files having that data. File* shows that it will search from all files. The filename is displayed with the line number after the name at starting of the line. The relevant word is highlighted to show the existence of the word in the text in the file.

In this example, the word is searched in all files of a specific extension, that is.txt. The Directory that is given in the command is the path of all files provided. The output also shows the way according to the extension. The line number is given after the filenames. 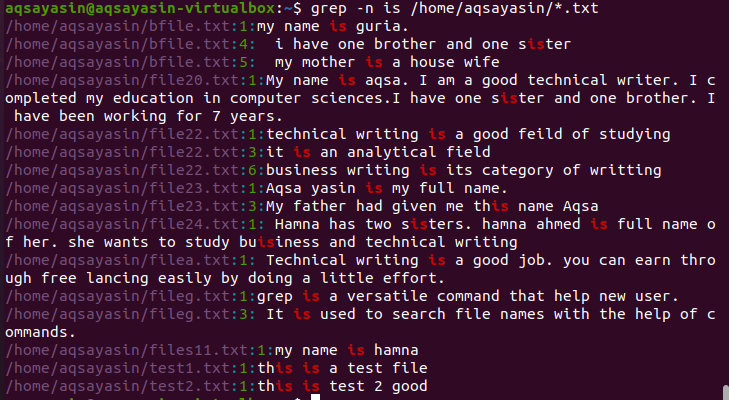 In this article, we have learned how to obtain the line number in the output by applying different commands. We hope this effort will help in gaining enough information regarding the relevant topic.