How to Check the CentOS Version – Linux Hint

For troubleshooting, bug fixes, and many other reasons, you may need to know the version of the operating system. Particularly when it comes to the configuration of software repositories or installation of any software, it is extremely important to get the right version of the software so that the solution is compatible with the operating system version. This article shows you various methods for determining the version of CentOS.

There are multiple methods that you can use to determine the CentOS version. This article shows you the three most effective and efficient methods that will work on any version of the CentOS operating system. The methods included in this article for checking the CentOS system version are as follows:

We will begin with the simplest method using the /etc/centos-release file.

Here, we have the output of the command, which shows that the release version number is 8.3.2011. The following shows you more information about the version number.

The version number of the CentOS operating system consists of three major parts.

You can also use the lsb_release command to get the version details of the CentOS operating system. Simply type the command given below:

Also, allow the installation of additional packages by typing “y” and pressing the “Enter” button: 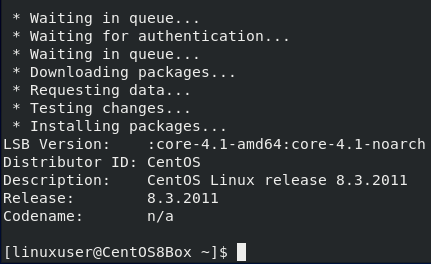 After the required packages have been successfully installed, the lsb_release command will print the required information. The version information will be written in the “Description” and “Release” entries and subsequent lines.

The hostnamectl command has printed a rather lengthy output, but the version-relevant information is “Operating System: CentOS Linux 8.”

Sigil is an open source EPUB editor available for Linux, Windows and macOS. With Sigil, you can create a new ebook in EPUB file...
Read more
Linux

Over 80 new articles were posted on Linux Hint this week.  They are summarized for you below for easy access to them.  We also have curated...
Read more