How to use Variables in Bash – Linux Hint

For those who have performed some programming tasks before, they will be familiar with variables. But, for those who haven’t any programming knowledge, variables are used to temporarily store a piece of information. Variables are defined in a program to store specific types of data like integer, float, and strings. As we know that bash is a weakly typed language in which variables are not bound with a particular data type, therefore, no need to define any data type to the variable at the declaration time. If we assign a numeric value to a variable then it will take it as an integer and in the case of a text value, it will behave as a string. In Bash Script, variables that can be defined in a Bash file or from the terminal are used to manage and control the actions of the whole bash program. Variables are quite easy to use but, if you don’t have a proper understanding of how they work then, you can easily get yourself in trouble.

In this article, we will discuss a variety of different methods through which we can understand how to create and use variables in a Bash Script. We have executed different examples related to variables on Ubuntu 20.04 Linux distribution. Let’s start the demonstration.

How do variables work?

As we mentioned above, a variable is a temporary storage for a piece of information.
The following two actions you may perform while using a variable in a bash script:

You can value variables using different ways. The most common is to directly set a value to a variable or you may set its value as a result of command processing or a program.
Reading a variable, we need to place its name with the $ sign at the beginning of that variable that you may want to read. Before executing every line of a Bash script, first, it checks if any variable names are present. It finds each variable and replaces its value with the name of the variable. Then, it starts the execution of a particular line of code and repeats the process for the next line.

There are following some important points on Syntax that you need to follow while reading a variable:

The basic syntax of variable declaration; Setting the variable value

For example, we want to assign a value like the string ‘welcome to bash programming: use of variables’ to a variable named ‘var_str’. Using the following command, you can do this task:

var_STR=“welcome to bash programming: use of variables”

Unlike most of the other modern programming languages, bash offers a picky syntax for setting variables. You should be aware that there is no need to add whitespace between the variable name, equal symbol, and the value that you want to assign it. Otherwise, it will throw an error message.

In the above command, you will receive an error due to the whitespace after the equal sign and the assigned value.

Let’s take an example in which we will store a string “Rules: how to use a variable in bash” and then the variable VALUE is retrieved through the echo command by appending the ‘$’ sign at the beginning of the variable name. The following command you need to follow to display a string on the terminal:

$ my_var=“Rules: how to use the variable in bash”

You will see the following output on the terminal window:

If you will not use the ‘$’ sign then, the program output will show different results and you may not get the required output. Let’s show you the following example:

$ my_var=“Rules: how to use a variable in bash”

In the above command, the ‘$’ sign is removed with the variable name ‘echo my_var’. So, you will retrieve only the name of the variable on the output.

You don’t need to use any operator to combine two or more variables output like other languages.

For example, here we are using a $var1 in which string value to be stored, and $var2 is used to store any integer or a numeric value. Execute the following commands on the terminal that will combine the var1 and var2 output.

The following output will be shown on the terminal after executing the above-mentioned commands:

The output can be printed without using any quotation but, if you want to use quotations then, only you have to use double-quotes.

Double quotes are used to read the variable’s value in bash.

Let’s take an example of the concatenation of two variables. We have used double quotes for one echo statement and a single quote for another echo statement. We have executed the following commands on the terminal that you can check the below-mentioned output:

Do arithmetic operations by using variables

For example, we have a variable n in which 50 numeric values are stored. We want to add more 20 in variable then, using the following command you can perform this operation:

In the above command, you have seen $n+20 command just combine two values. It does not give you the desired output. By adding initial brackets ((n=n+20)), you have performed the arithmetic operation with result 70.

Do arithmetic operation by using bc command

The other method to do arithmetic operations is the use of bc command in bash.

Using the following commands on the terminal, you can perform arithmetic tasks:

In the above code, you can see that when you have used the bc command for doing arithmetic operation division then it omitted the fractional parts from the result.

When you have used the -l option with bs command, you also get the fractional value as a result.

Use of variables in a bash script file

You can also initialize a variable in a bash script using the same method which is mentioned in the above examples. However, you need to create a bash script file. To do that, create a file using a text editor and paste the following code in it. Now, save it with .bash or .sh extension.

Str=“How to use variables in BASH Script”

You will see the following output on the terminal:

Use of local and global variables

We want to add two variable values using a function addition(). When this function will call the value of the local variable ‘num’ is taken for calculation but the number which is a global variable remains unchanged. When we will declare local variables we need to use a local keyword with the variable name.

Run the above script using the following command:

The following output will be displayed on the terminal after running the above script:

How to use array variables in BASH

Arrays are used to store the list of data. Therefore, in the bash script, we can also use array variables to store data.

Let’s take an example that will show you how to use array variables in bash script. The arrays elements are separated by spec in Bash programming. Here, we have taken an array of 5 elements. We don’t have any pre-defined function to count the total array’s elements. In bash, # with * or ‘@’ is used to count the total number of array’s elements. All array elements are indicated by * sign. We have used a loop to iterate within the array elements. Then, the script will read the array values and with a key and will print the output on the terminal.

# count the total number of elements in an array
total=${#my_arr[*]}

#display value of each element of an array
echo “Array Elements values:” 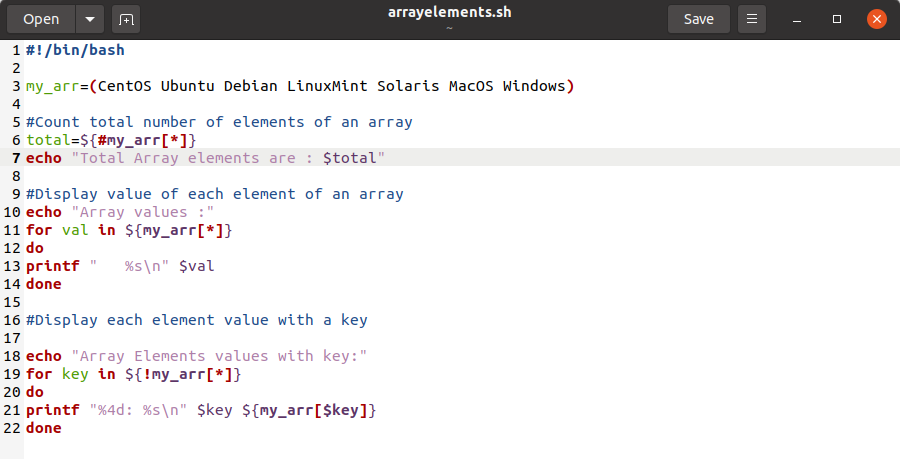 The following output will be display on the terminal: 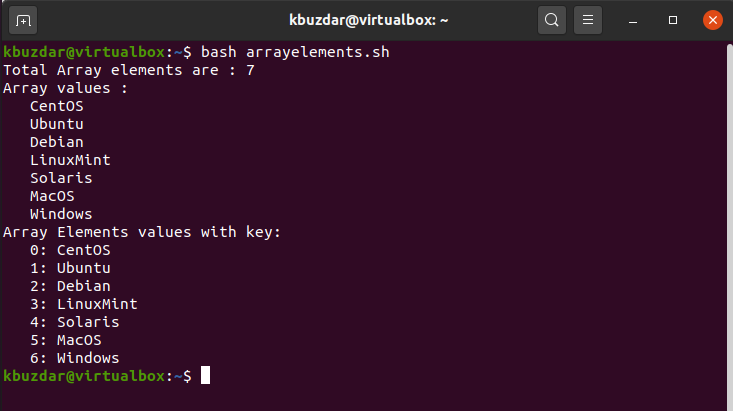 We are summarizing some important key point about the variables in Bash programming:

While setting a value for a variable. You must remember that no need to add spaces on either side of the = sign.

In this article, we have explained a clear concept about bash variables that how we can declare and read variables values in bash programming. If you will exercise the above-mentioned examples, you will be able to deal with variables more efficiently in bash scripts. We have executed various commands on the terminal as well as have also executed in a bash script. Bash commands on the command line work exactly the same as in a bash script but when you have a large piece of code you can manage it in a script file rather than running one by one on the terminal.

How to Install phpMyAdmin on Rocky Linux 8