Following the release of Apple’s in-house M1 chip for MacBook and Mac Mini devices, it has received a ton of positive feedback from critics and consumers alike. As a result, tech companies such as Microsoft and Intel, seeing the potential of the Apple M1-powered devices, started ad campaigns to point out the limitations of the platform. Now, Intel has created a dedicated website to compare its chipsets with Apple’s latest M1 chip.

The PC vs Mac website is a part of the “Go PC” campaign which the company started back in February. Under this campaign, the chipmaker pointed out the shortcomings of the Apple M1 chipset in a series of tweets on its official Twitter handle.

With the website, however, Intel is going all-in to encourage consumers to choose its platform over the Cupertino giant’s latest M1 devices. It points out various limitations of the Apple M1 chip such as the requirement of extra devices and gear, limited device support, limited games, and others. 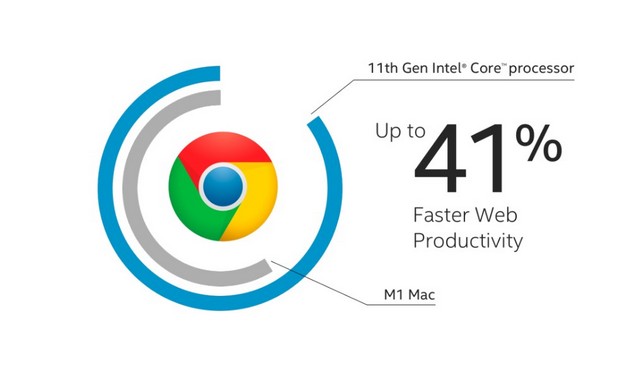 Further, Intel cites PC’s capabilities of supporting multiple 4K displays, popular apps and plugins, and games that do not support Apple’s M1 devices. The company carried various tests of its own chipsets and Apple’s latest M1 SoC to prove its points.

Lastly, the website offers a section from where consumers can browse through various Intel-powered laptops from Samsung, Asus, Razer, and other manufacturers. However, Intel’s arguments are heavily biased.

Clearly, Intel is feeling threatened by the Cupertino giant’s ARM silicon and all the positive feedback it garnered since the release. As a result, the company is coming with these ad campaigns to retain its user-base and prevent them from switching to Apple’s M1-powered devices.

However, going into the future, Apple is expected to further develop its M1 platform to bring support for more apps, games, plugins. Moreover, the company is also reportedly developing a next-gen M1X chip. So, we can expect such ad campaigns from Intel and other companies to continue in the coming days.

There are about to be a lot of antitrust bills taking aim at big tech, and here’s one more. Senator Josh Hawley (R-MO) rolled...
Read more
News

Risk and compliance startup LogicGate has confirmed a data breach. But unless you’re a customer, you probably didn’t hear about it. An email sent by...
Read more