Having already launched a cut-price mobile-only plan in India a couple of years ago, Netflix is now offering a new “Mobile+” plan with Full HD support at Rs. 299 per month. The news comes just months after the company started testing the new plan, although, it was reportedly priced at Rs. 349 during the testing phase.

Unlike the existing mobile plan that only offers up to 480p streaming, the new Rs. 299 Netflix plan will unlock Full HD (1080p) streaming for Rs. 100 (~$1.50) extra per month. What’s more, it will also be accessible on computers, while the mobile-only 480p plan is only available on smartphones and tablets.

A Netflix India spokesperson has officially confirmed that the company is piloting the so-called Mobile+ plan, but said that its long-term availability will depend on the response it gets from users. In a statement to ET, they said: “We launched the mobile plan in India to make it easier for anyone with a smartphone to enjoy Netflix. We want to see if members like the added choice Mobile+ brings. We’ll only roll it out long-term if they do.” 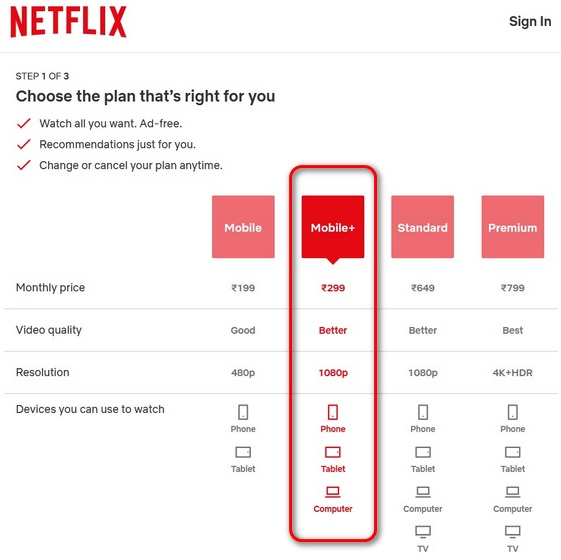 The new plan is already listed on the Netflix website in India and is offered to all new and existing users. As can be seen from the screenshot above, you will able to stream shows and movies on smartphones, tablets, and computers. But folks who want to watch ‘Stranger Things’, ‘Lucifer’ or Bollywood movies on the big screen will have to pony-up at least Rs. 649 for the privilege to stream at Full HD (1080p).

The Rs. 199 plan has been a blockbuster success for Netflix in India, but many users have been clamoring for HD support at an affordable price. That is exactly where the Rs. 299 plan comes in, with Netflix hoping that it will be able to persuade users to pay-up a little more for the high-res content. Plus, do note that as the original mobile plan, this one will also be accessible from only one device at a time, which means two people won’t be able to watch two different programs on two different devices simultaneously.