Start up solo, or bring on a co-founder? 4 factors to consider – TechCrunch

Chetanhttps://thcb.in
PowerShell is an open-source command-line tool with cross-platform availability. The PowerShell tool allows one to automate several tasks and perform few tedious tasks by executing commands. The Measure-Object is a PowerShell utility that acts as a cmdlet to count objects. The extended functionality (can be achieved by using parameters) of Measure-Object can be used to get the maximum, minimum, average, sum, and standard deviation of numeric values. Moreover, it can also be applied to strings to count a number of lines, words, or characters.

In this article, the PowerShell count with Measure-Object is explained in detail and several examples are provided for better understanding.

How count works with Measure-Object

The upcoming sections provide usage of count with measure objects in multiple scenarios.

Count the number of entries

When PowerShell Cmdlets are used with Measure-Object, it returns the count of the entries. For instance, we are piping Measure-Object with the Get-Command cmdlet and the following command is executed in this regard.

Note: As the Get-Command cmdlet prints the output in four columns, CommandType, Name, Version, and Source. So, you can apply any of these properties with Measure-Object as well. 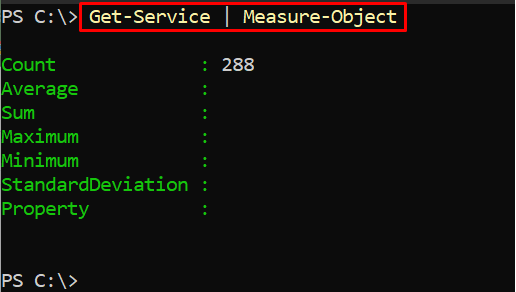 In the above two commands, Measure-Object has been used on several cmdlets individually.

Measure-Object can be used with multiple cmdlets. In order to demonstrate this, we carried out the following four commands:

The third command stores the sum of $comm and $ser in a new variable named $Total.

And the last command pipes that $Total variable with Measure-Object.

The output shows that the entries of both cmdlets (Get-Command and Get-Service) are summed up.

Determine how many characters, words, and lines there are

Count the number of input of hashtables and integers

For integers, it acts the same. The following command gets integer values as an input and when these values are piped with Measure-Object, the output shows the number of inputs.

In the output shown above, the Average, Sum, Maximum, Minimum, and Property options are empty as we have not passed them with Measure-Object. If you want to get these values too, you have to use the -AllStats option with Measure-Object as described below:

PowerShell supports multiple cmdlets to perform the tasks automatically. The Measure-Object is one of them and it counts the number of entries in any object, cmdlet, function, and many more. This article explains the working of count with Measure-Object in PowerShell. Several examples are also provided that show the usage of multiple perspectives. Apart from this guide, you can visit linuxhint for more PowerShell tutorials. Happy Computing !!

How to Install WordPress with Apache and Let’s Encrypt SSL on Ubuntu 22.04

How to Install WordPress with Nginx and Let’s Encrypt SSL on Ubuntu 22.04

Start up solo, or bring on a co-founder? 4 factors to consider – TechCrunch

Sony confirms its new PlayStation Plus tiers will launch on June 13, reveals list of games – TechCrunch