Realme 7i review: For the sake of newness

Realme has been bombarding the smartphone market with at least 3 phones every month ever since the lockdown lifted. While it is a pain for us reviewers to frantically keep swapping our SIM cards every week, having more options is always better. In pursuit of giving options, Realme came up with the Realme 7i – another affordable Android phone that’s high on features yet starts at Rs 11,999. Also Read – Realme 7i with Snapdragon 662, 5,000mAh battery launched in India; check details

At first glance, the Realme 7i looks like a slightly watered-down version of the Realme 7 – a practice that Realme followed for the Realme 6i earlier this year. While it comes across as a good smartphone when compared to the competition, it is a downgrade in many ways from the Realme 6i. After using it for 10 days, I am struggling for reasons as to why you should buy it over the Realme 6i, or the Motorola Moto G9. Also Read – Realme 7 review: Unbeatable gaming package on budget

Realme has started going for new designs with the Realme 7 series. I personally think the Realme 7 and Realme 7 Pro are among the most handsome phones you can buy for less than Rs 20,000 – the matte finish coupled with the tasteful design choices. Sadly, the Realme 7i does not come close to its more expensive siblings. Also Read – Realme 6i Review: An affordable, performance-oriented mid-range device done right

The Realme 7i apes the design ethos of the Realme 7 but makes its cost-cutting efforts obvious. Look at the glossy rear panel, as an example. It is too glossy and feels cheap to hold in hand. It reminds me of the Realme phones from a year ago overdoing the mirror finish. The plastic material doesn’t feel solid and after a few days, it caught scratches easily. Additionally, it loves dust and fingerprint smudges.

The only saving grace is the rectangular camera module that imparts some sense of a trendy design on the 7i. The capacitive fingerprint sensor sits at the back instead of the frame. The frame itself is essentially a cleverly masked plastic unibody shell that emulates matte metallic materials from expensive phones. You get a headphone jack, a USB-C port towards the bottom. The buttons are easy to reach but they don’t have enough key travel – I don’t know how long will these last. The Fusion Green color looks classy to some extent and I wish Realme chose a matte finish for the rear. The front is dominated by a 6.5-inch display with narrow borders on three sides. The chin is noticeable and so is the punch-hole cutout. I think the Realme 7i and Redmi Note 9 are the only phones in this segment to ditch the notch – correct me if I am wrong.

Despite the plastic body, the Realme 7i weighs 188 grams, which is quite heavy my modern standards. Realme would argue that it is due to the big 5000mAh battery.

In the last few years, Realme has created high hopes for performance expectations. Every Realme phone I have used this year has been leading the class with its performance. Case in point is the Realme 7 that plays games like no other phone at its price. I wonder what happened with the Realme 7i, since this is an inconsistent performer. There were days that I did not want to use it anymore. Allow me to explain. Realme will draw your attention with the 90Hz refresh rate display, which is among the class-leading displays you will find in a Rs 12,000 phone. What Realme does not highlight is the 720p resolution. A 720p display isn’t an issue and in most use cases, it works just fine. I did not find pixelated or blurry interface throughout the UI. Icons and text appeared sharp. The screen itself looks vibrant, especially with Realme’s UI. The 90Hz refresh rate does make for smoother scrolling and animations.

Sadly, sunlight legibility is poor. Also, A 720p display means you can see videos max out at 720p resolution, which is a bummer. The Redmi Note 9 for the same price offers a 1080p resolution display. The 90Hz refresh rate may attract geeks but it does little to make for a better experience. The 7i uses a Qualcomm Snapdragon 662 chipset paired with up to 4GB RAM and 64GB storage. I have previously used the Moto G9 with the Snapdragon 662 and I wasn’t quite impressed with the performance. It is a decent chip but it needs to be optimised to get the best out of it.

On the Realme 7i, it has to deal with a heavier Realme UI and that’s where the issues start creeping up. Regular tasks such as scrolling, opening apps, texting on WhatsApp, watching videos and even playing casual games in fine for a phone of its class. However, this “fine performance” is inconsistent and most of the times, I witnessed stuttering animations and delayed app load times.

I initially assumed there was an issue with the software version and waited for bug fix patch. That did not seem to do anything. Even now, it works fine at times but the majority of time, it is struggling for breath. Maybe the software lacks optimizations, given the already weaker Snapdragon 662 chip. Gaming is just doable on the Realme 7i – Call of Duty Mobile was a laggy mess and so was Asphalt 9. Games like Candy Crush and Shadow Fight 2 were fine though. Realme UI itself is the same you find on any other 2020 Realme smartphone. The layout is clean and all basic functions are easy to access. Realme does not pre-load many third-party bloat apps but there’s a dozen of Realme apps that most of us may not need. You can uninstall some of them but the others are stuck to the spine of the system. There are a host of customization options to tweak the phone to your heart’s content. The Realme browser, however, keeps throwing up news notifications all the time.

The single loudspeaker is tinny at its best and I was not liking my YouTibe sessions on it. Thankfully, you have the option to plug a wired headphone or pair wireless earbuds. The Realme Buds Air Pro I had offered easy pairing to the device. Cellular network reception was good and I did not witness instances of network dropping.

The Realme 7i gets a 64-megapixel main camera at the back with an aperture of F1.8. This is paired to an 8-megapixel ultra-wide camera, a 2-megapixel macro camera and a 2-megapixel monochrome camera. This setup is similar to the one on the Realme 7 and in real-world scenarios, it performs similarly. Hence, you are going to get good camera performance in daylight but the lowlight performance falls away. In the normal mode, the camera is good enough in daylight conditions. Sharpness isn’t that good and if you zoom, there’s a notable loss in quality. In cloudy conditions, it becomes worse as the details go softer to conceal the grains. In the Night mode, the sharpness falls and while you get brighter images, most of your subject goes soft. Realme’s classic oversaturated color profile makes photos look dramatic. The 64MP is slightly sharper with details but it struggles with tricky lighting

With the 8-megapixel ultrawide camera, details take a hit and colors are always boosted unnecessarily. Distortion towards the edges is noticeable and I witnessed loss of sharpness as you move away from the centre of the frame. In sub-par lighting, it is best to avoid this camera for any purpose. 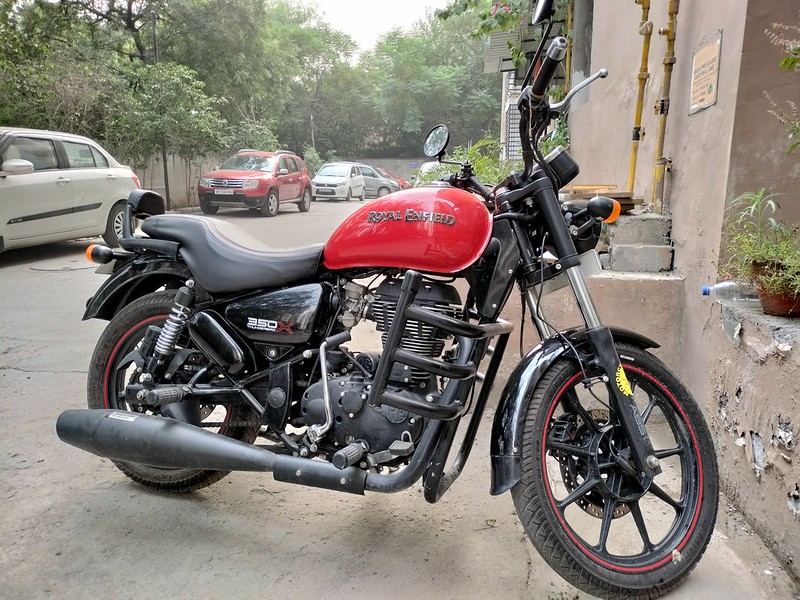 Once again, there’s a 2-megapixel macro camera with a focal length of 4cm. It is fine in well-lit situations but the quality suffers, with soft details and boosted colors. Low light conditions make the camera struggle badly and its best to avoid it at night. The monochrome camera theoretically helps with details but I did not notice any difference. Portrait mode photos look decent with nice subject separation.

The 16-megapixel front camera captures lots of details on the subject and boosts colors to make selfies look dramatic. The aggressive post-processing, even without beauty mode, ruins the look at times. Subject separation in the portrait mode is nice but it struggles with the background exposure. Realme has stuck a 5000mAh battery inside the 7i and as expected, it can easily last an entire day and extend to the first few hours of the next day. My usage involved a lot of texting on WhatsApp and Slack, along with 30 minutes of YouTube sessions, social media browsing, an hour of music streaming – every day with the 90Hz mode switched on. The 18W fast charging fills up the big battery in just over 2 hours. I wish Realme offered support for its 30W fast charging system.

Realme 7i: Should you buy it?

The Realme 7i is a good smartphone, considering all the features and specifications it offers at its price. The idea of a 90Hz display at a price of Rs 11,999 is appealing. On top of that, Realms has thrown in a 64-megapixel camera, which none of its rivals feature. You can say that the Realme 7i gives one bragging rights over a Redmi Note 9 and Moto G9. Sadly, the user experience itself suffers. The Realme 7i performs inconsistently and its 720p display falls short of the 1080p display on the Redmi Note 9. The 64-megapixel camera does not give the perceived superiority you expect from such lofty camera hardware. The build quality is tacky and I doubt how long will those buttons last in the hands of a common man.

You may argue that I am complaining too much about a phone costing Rs 11,999. However, the Redmi Note 9 is a more well-rounded package at the same price. The Motorola Moto G9 at similar prices with the same chipset offers better overall performance, superior battery life and the best camera performance in its segment. Additionally, I would suggest you spend an extra Rs 1,000 and get the Realme 6i. The Realme 6i offers better performance with the Helio G90T chipset, an option to use the 30W faster charging, better build quality and a 1080p display with 90Hz refresh rate.

realme UI Based on Android 10