If Realme’s mid-range phones stand out for something, it is bringing the specifications of higher-end smartphones down to the mid-range segment where a lot more people can access them. The Realme 6 Series from last year and the latest Realme 7 series stood as proof to that fact. However, when we learned that the brand’s budget Narzo series had a Realme Narzo 20 Pro variant as well, we were as confused as we were excited. Also Read – Realme Q2 detailed specs spotted in Geekbench results

You see, Realme’s Narzo series works well around the Rs 10,000 mark, where the performance-oriented budget phones stand out as unique prospects. However, the Realme Narzo 20 Pro is far away from the Narzo 20 series, in terms of specifications and price. Starting at Rs 15,000, the phone is close to the territory of Realme’s own 7 series. However, no phone in the segment offers what the Narzo 20 Pro does, which is an insane 65W fast charging speed. Does that make this good enough to consider over other competitors in the segment? Read on to find out. Also Read – Realme X7 Pro gets NCC certification ahead of global launch

Breaking down the design, there is a  power button/fingerprint scanner on the right of the device. The volume rockers and SIM tray go on the left. The bottom features a 3.5mm headphone port, a microphone, a USB Type-C port, and a speaker grille. The top side goes clean. There is the linear quad-camera module on the back and on the front, we have a single punch hole on the top left. Also Read – Realme 7i with Snapdragon 662, 5,000mAh battery launched in India; check details

The Realme Narzo 20 Pro is a good looking phone but isn’t the best-built device. The plastic back has a gorgeous panel which sadly, creaks near the edges and the center if you press it. The buttons are also a tad wobbly. It isn’t bad but unlike some of Realme’s devices in the segment, this one isn’t exactly built like a tank. It won’t matter if you slap on a good protective case. Drop the phone naked, however, and it could cause some serious damage. The plastic frame on the side however feels pretty solid. It even looks pretty classy on the minimal black color variant we have.

The Narzo 20 Pro, unlike its budget-oriented brothers, packs an FHD+ screen. This is a 6.5-inch IPS LCD panel. There is the now-standard 20:9 aspect ratio with an 83.4 percent screen-to-body ratio. The panel itself is a good quality screen in the segment and doesn’t steer far away from what the competition offers. We see decent colors and great viewing angles. However, the max brightness level of the phone doesn’t do very well under direct sunlight. At 6.5-inches, the screen feels just the right size at a time when the norm for mid-range screens is nearing the 7-inch mark. There is Corning Gorilla Glass protection on here. However, the screen comes with what looks like a poor quality screen protector that is a magnet for scratches and smudges. We’d just take it off and either uses the screen as is or invest in proper tempered glass protection.

The Realme Narzo 20 Pro comes with Android 10 with Realme UI out of the box. The interface isn’t the cleanest, and may not instantly appeal to people looking for a stock-like appearance. However, it is filled to the brim with a number of handy features, similar to what we find on other Realme smartphones in the segment. Throw in the 90Hz and the animations and fluidity of Realme UI make the phone come alive. Talking performance, we have a MediaTek Helio G95 chipset here. That is the best of the Helio G series right now and coupled with the 6GB/8GB RAM you’ve got here, multitasking is a breeze. The Realme Narzo 20 Pro can handle its own with multiple apps at a time quite comfortably. When it comes to gaming, you get some good performance too. While the higher graphic settings and frame-rates may be unlocked in certain titles, keep in mind that the consequence is quick heating up of the device. If you plan on gaming for more than an hour at a stretch, we’d suggest toning down the graphics a little.

The Realme Narzo 20 Pro isn’t a phone that flaunts its camera setup above other things. However, there is a 48-megapixel main Samsung sensor on the phone here. In typical Realme quad-camera fashion, you have four sensors here. The others are an 8-megapixel, a macro lens, and a B/W monochrome lens. The main sensor on the Realme Narzo 20 Pro captures good images. The pictures we took looked crisp and mostly vivid. We found saturation levels to be a little on the higher side at times. This resulted in photos with colors that pop out a little more than usual. While not big on color accuracy the saturation does give the pictures a vibrant appeal.

Coming to low-light shots, we found the Realme Narzo 20 Pro capable of taking pretty decent pictures. The processing manages noise well while the pictures themselves capture a decent amount of light thanks to the 4-in-1 pixel-binning on the sensor. A dedicated night mode gave us even better results in darker environments and with artificial lighting. The performance of the 8-megapixel ultrawide sensor is also average. While the images do capture a larger frame, you will see softer images that get noisy very fast in inadequate lighting. Check out the samples below. 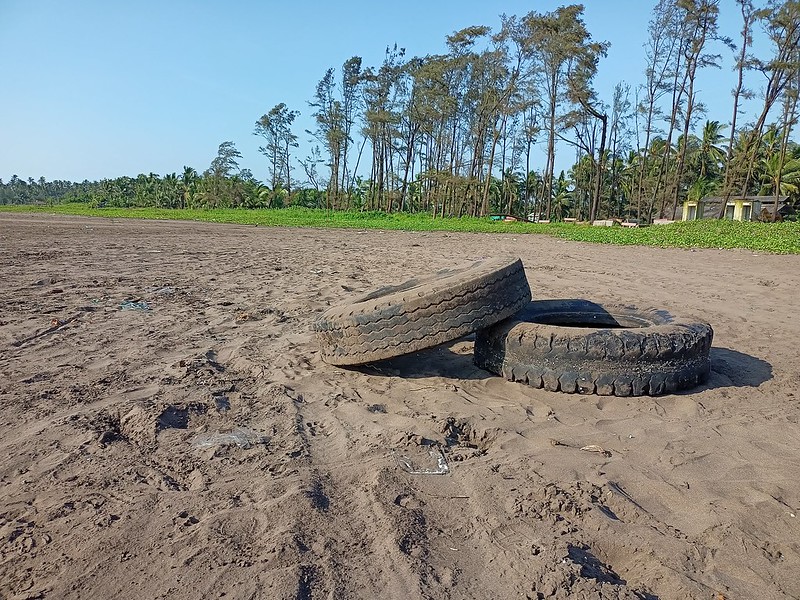 The low-resolution Macro sensor on the Realme Narzo 20 Pro is just not good. It nearly always takes shaky pictures when you shoot with your hand. Getting it to be stable also doesn’t help with the picture quality, which is often noisy and inaccurate with colors. You’re actually better off using the primary lens with some cropping for your macro pictures. Front camera results on the Realme Narzo 20 Pro are pretty good. There is a single 16-megapixel Sony MX471 sensor here that does wonders here. Selfies taken with the front camera are fairly crisp and accurate with colors. Details were great too, even while taking selfies in low and artificial light. Portrait mode worked well even without a dedicated lens, and edge detection was mostly on-point.

The Narzo 20 Pro features a 4,500mAh battery setup, split across two 2,250mAh 3C cells. This lets the phone efficiently manage heat while its 65W SuperDart charging is in action. Charging is extremely fast. You could leave the phone on charge while you have a quick breakfast and by the time you pick it up, it would likely be full. Even if its not, expect enough juice to last you the whole day. The 4,500mAh battery isn’t the biggest in the segment. Many competitors are offering 5,000 and 6,000mAh batteries here. If battery life is an important aspect to you, you will need to make a call on either faster charging and a comparatively lower capacity with the Realme Narzo 20 Pro, or a bigger capacity battery with ‘relatively slow’ fast charging. Mind you, the ‘relatively slow’ fast charging we just mentioned could be a 30W charging system as well, like on the Realme 6i, which is still pretty fast in the segment. So we leave this bit of personal preference to you. Verdict: Should you buy the Realme Narzo 20 Pro?

Well, with a lot of phones being launched in this segment lately, and multiple options coming from each brand, this question gets harder every couple of months. We are at a stage where a phone needs to be the best-in-class at least one aspect while being above average at the others, for it to shine. The Narzo 20 Pro offers a good balance of performance, camera quality, and overall usability for Rs 15,500. However, its standout feature really is the 65W charging we’ve already spoken about. The only downside is the build-quality. Unlike camera performance, physical design, software, or gaming capabilities which may or may not interest or matter to every user, battery life and fast charging is something that affects us all. The fact that flagship-level fast charging tech is now available at lower mid-range prices will make the Narzo 20 Pro a benchmark for itself as well as other brands moving forward. The rest of the phone is good too, but not outstanding. Hence, we wouldn’t recommend the device as an upgrade that you must have. However, if you happen to be looking for a new phone around the Rs 15,000 mark, the Realme Narzo 20 Pro offers an overall package, that despite its few cons, is hard to beat.