Xiaomi gets most of it right with few improvement areas

The smartphone is priced starting at Rs 11,999 and will be available for purchase for the first time in India on March 16. It can be grabbed from Amazon.in, mi.com, Mi stores and preferred partners and offline stores across the country. Also Read – More foldable phones coming in 2021, Oppo could be next to join the bandwagon

1) Should you get the Redmi Note 10 for that pocket-friendly price tag or not?

2) Should you upgrade your current Redmi Note 9 from last year to the new one?

To find out, I have been using the Redmi Note 10 for the last 10 days now and here are answers to all your questions related to the new Redmi Note.

If I go back a year, I remember that the Redmi Note 9’s design didn’t impress me personally as much. It was primarily because of the complex design of the camera module, something we didn’t see on a Redmi Note device before. I guess, Xiaomi also felt the same and hence, minimalised the design of the Redmi Note 10 when compared to its predecessor.

The phone comes in three colour options including Aqua Green, Frost White and Shadow Black. I’m using the Frost White variant, and as also mentioned in our first impressions, this one takes design cues from Xiaomi’s last Android One phone, aka the Mi A3. I believe smartphone manufacturers should bring more and more white colour phones instead of those boring black and blue options.

Coming to the design now, the Redmi Note 10 looks absolutely stunning at this aggressive price point. Competitors like the Poco M3, the Samsung Galaxy M12, among others should surely take note on how to make a budget smartphone look so stunning. What I like about this one is that despite including four image sensors, the vertical rear camera module doesn’t look cluttered. The rear panel design is just so neat with the quad rear camera module and a Redmi branding at the extreme bottom-left.

On the front, the Redmi Note 10 gets a hole-punch cutout to pack the 13-megapixel selfie camera. Interestingly, the hole-punch camera sits at the top-centre of the display and is one of the smallest I have seen in this price range. While the bezels on three sides get slimmer, the chin at the bottom remains, but at no time does it interfere with the viewing experience.

The fingerprint sensor shifts to the side and is easily reachable. It unlocks the phone in just a blink of an eye. In fact, in my opinion, it is one of the fastest fingerprint sensors offered at this price. The sensor worked for me even when my hands were sweaty (Summers in Noida, what can I say?).

Another thing that impressed me is the haptics on this Redmi phone. I believe, the Redmi Note 10 gets one of the best haptics in any phone at Rs 12,000 in India.

There’s face unlock support as well, but I used the side-mounted fingerprint sensor most of the time. However, I must mention that the unit I have comes with several bugs possibly because it runs on an early build of MIUI 12. To state one of the bugs, the fingerprint sensor often froze. I surely feel that Xiaomi could fix this bug with a software update in the days to come. Jumping to the build quality straight, this is one area where Xiaomi takes it very seriously, be it for its flagships or budget devices. Despite packing a polycarbonate (a fancy term for plastic) back, the Redmi Note 10 doesn’t feel cheap at all. The matte finish, in my opinion, makes the phone seem pricier than it is. The frames, however, look slightly cheaper but I believe the premium design balances it out well.

One of the best things about the Redmi Note 10 is the compact form factor. The phone is extremely easy to use with one hand, which is great. Another interesting thing about the Note 10 is its weight. Despite packing a big 5000mAh battery, it feels extremely light and sleek. Plus one for Xiaomi to balance the weight so well.

The display is one of the key highlights of the Redmi Note 10. For the very first time, after consumers requested for several years, the entire Redmi Note series gets a Super AMOLED display. The screen size on the Note 10 is just about perfect at 6.43-inches. I watched several videos, played a lot of games, browsed social media platforms, so on, and in every scenario, it makes for an interesting visual experience, i.e., eye-popping colours and decent viewing angles.

Even in outdoor scenarios with the scorching sun at the top of the head, the screen of the Note 10 adjusts the brightness enough to watch YouTube videos. Of course, not as bright as it is in indoor situations, but it stands ahead of the competition like the Poco M3 for sure. In the outdoors, I often had to keep the brightness level at the maximum, while indoors, around 40 percent of the brightness level was just about right for me. Another interesting feature the Note 10 offers is the always-on-display with a variety of interesting animations. You also get the option to choose between light and dark mode (with the option to schedule the latter). I like the fact that Xiaomi has taken care of the slightest of details on this one despite that aggressive pricing.

Right off the bat, the camera performance of the Note 10 is a mixed bag. In good lighting conditions, the Redmi Note 10 captures pictures that are rich in details as well as colours. By default, the phone captures photos in 12-megapixel; you will need to manually enable the 48-megapixel mode. I personally believe that the camera app is a little complex to handle. To enable the 48-megapixel mode or the macro, you will need to head to the settings option that sits at the top-right corner. It’s difficult to navigate through these options.

Coming to the camera performance, the Redmi Note 10 clicks good, detailed pictures in daylight, and gets the colours accurate. It’s great to see that the photos don’t oversaturate like most phones at this price point. Indoors though, the details are often missed. Pictures turn out to be grainy sometimes, but colours still look good. For more details, the 48-megapixel camera mode helps big time. Photos clicked in this mode captured more details in both indoor and outdoor situation. One area that could have been better in my opinion is the macro. In most scenarios, pictures shot with the macro mode miss on details, but the colours look close to accurate. As I mentioned before, the unit I have comes with some bugs which I believe Xiaomi will fix in future OTA update. One of the bugs was in the macro camera mode. While clicking a macro shot, when I placed the lens close to the object, the colour changed. For instance, the pink flower turned purple, which is weird.

Moving to low-light photography, the Redmi Note 10 turns out to be impressive in this area, especially at the price it comes at. Photos clicked in challenging light with the normal camera look good overall with fair details and colours. To get accurate colours and more details, the night mode helped big time in this case.

The Note 10’s front camera performance is decent and often unusually brightens the face, which is something I didn’t like. Selfies get the details just about fine. The portrait selfie mode impressed me as it gets the subject separation, details and colours just right. Check out the camera samples below for a better overview. 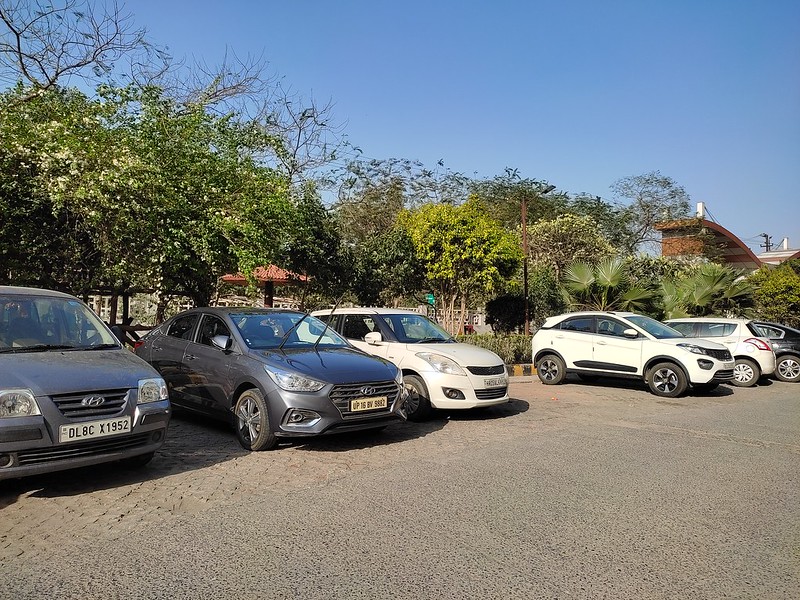 This is one of the few areas where the Redmi Note 10 needs improvement. On paper, the Snapdragon 678 SoC looks appealing but the reality turns out to be slightly different. The phone lags most of the time (probably because it runs on an early build of MIUI 12). It takes time to open apps or even when you’re switching between them. Well, I know I’m expecting a lot from an Rs 11,999 smartphone. It can’t be as good as the iPhone 12, Samsung Galaxy S21 series, or a OnePlus 8T, but I do expect it to get at least the basics right.

I believe, consumers looking to purchase a phone at this price point will not be into gaming as much but if you are, there are better options available in the market. This phone works just about fine with basic games like Subway Surfers or Temple Run 2. I also played some graphically intensive games like Call of Duty: Mobile and Asphalt 9, but unfortunately they didn’t run smoothly and the graphics stutter. So, if you’re looking for a budget phone that runs games well, this one is surely not for you. While the performance could have been better, what impressed me is the overall user experience. The phone runs MIUI 12 based on Android 11, which is just so refined with a host of new, useful features when compared to the previous integration of the MIUI. My personal favourite is the search bar on the app drawer at the bottom. The overall UI looks extremely clean when compared to the previous version, the MIUI 11. There are several third-party apps besides the ones Xiaomi offers, which can be removed if required.

Another highlight of the Redmi Note 10 is the stereo speakers, which in my opinion are one of the best you will get at this price point. Should you buy the Redmi Note 10 starting at Rs 11,999? In my opinion, the latest iteration of the Redmi Note gets most of it right including the design, display, battery and partly the cameras as well. Few areas where this phone lags are in the performance and some parts of the camera as well like macro. Overall, despite tough competition, I believe, the Redmi Note 10 shines and is a good option to consider under Rs 12,000 in India right now.

All in all, I suggest, if you are stuck on an old Redmi Note 7 or Note 8, upgrading to the Redmi Note 10 makes sense and is a great deal. But, if you are using the Redmi Note 9, it is better you wait for the next version of the Note that could possibly bring more upgrades, and probably 5G support. Who knows!