Xiaomi Redmi Note series has had a clear vision ever since its inception: give people good-specced phones starting at sub-Rs 10,000: an ideology, other smartphone makers adapted quite quickly. But, as a standard theory of evolution, things are bound to change, and this applies well to smartphones too. The Redmi Note lineup began evolving both in terms of features and price with the introduction of the Pro/Pro Max variants. Also Read – Redmi K40 Game Enhanced Version officially teased, gets pop-up shoulder buttons and more

This year too, we have them in the form of the Redmi Note 10 Pro and the Note 10 Pro Max. The Pro variant is the budget middle child that has a lot of fancy offerings to make: a 120Hz Super AMOLED display, 33W fast charging, 64-megapixel quad cameras, and more. However, is it the right option to go for under Rs 20,000? Does it dismiss the need for a pricier Redmi Note 10 Pro Max, which comes with 108-megapixel cameras? Let’s find out. Also Read – Xiaomi Mi 11X, Mi 11X Pro prices leak, to be more affordable than OnePlus 9R

The Redmi Note 10 series not only brings noticeable changes to its spec sheet (over the predecessors) but looks quite different (in a good way) too. The Redmi Note 10 Pro is an example. While the front gets a punch-hole display, which is a highly adaptive display type for many Android phones, the back panel is where all the change lies. Also Read – Top five smart TVs under Rs 30,000 best suited for watching cricket this IPL 2021 season

Much like last year, Xiaomi has put in efforts to make its budget offerings look premium. And this is visible. The nicely designed vertical rear camera setup and the premium texture are the ingredients of a well-cooked recipe for which you don’t have to spend a lot. This is what Xiaomi lovingly calls the ‘Evol’ design and it is something that can be loved.

This premium feel is also ensured by the pretty good build quality. Despite a plastic frame, the ‘plastic-ness’ is the least noticeable. And, then the lightweight of the device acts as the icing on the cake you need. The frosted back panel doesn’t attract smudges and a layer of Corning Gorilla Glass 5 for protection is an added benefit. But, despite that, the screen attracted minor scratches during my almost 10-day usage. Hence, adding a layer of tempered glass is highly recommended. The phone, with a 6.67-inch display, has minimal bezels to look at, which feels well-distributed for a better viewing experience. But, it isn’t small enough to allow for easy one-hand usage, especially when you wish to just lie down and use the phone, quite a likely situation for most of us.

Among others, the 3,5mm audio jack, dual stereo speakers, and an IR blaster (a Xiaomi thing for years) are the noticeable elements that are also attractively useful.

As mentioned above, the display is rated at 6.67-inch and is based on a Super AMOLED panel, which is a first for the Redmi Note phones. It also supports a Full HD+ screen resolution and a 120Hz refresh rate. On paper, this is a perfect package for a phone that falls under Rs 20,000 and rightly so. The screen proves to be quite a delight while watching content on it. The Super AMOLED screen ensures vivid colour production. You get the usual AMOLED duo: deep blacks and higher contrasts. If you are a sucker for this, the Redmi Note 10 Pro gives you just that at quite a reasonable price. The Always-On-Display (AOD) is another noteworthy feature, which with a dollop of customisations, calls for easy access to the notifications. Plus the small punch-hole doesn’t disrupt the usage even if it sits in the middle of the top part.

The 120Hz refresh rate is another highlight of the device. It makes the usage quite smooth, making jumping from app to app quite easy. Overall, it’s quite a display for the price we have to pay and doesn’t really raise anything to complain against.

The smartphone gets four rear cameras, out of which the main camera is the only differentiator between the Pro and the Pro Max siblings. Before we compare, here’s a look at the camera configuration. There’s a 64-megapixel main camera, an 8-megapixel ultra-wide lens, a 2-megapixel depth sensor, and a 5-megapixel macro lens. There is a 16-megapixel front camera. There is support for tons of camera features: HDR, Night mode, Vlog mode, Dual-video mode, Beauty mode, slow-motion videos, 4K videos, Pro mode, Pro colour, Tilt-shift, Long exposure, and more. All of this will get you excited for sure, making you wanna grab the phone and click as many pictures as possible.

As I already mentioned, the main difference is the 108-megapixel primary camera on the Redmi Note 10 Pro Max, which the Pro lacks. I compared both of them and I agree, there’s a difference in real life too. The 108-megapixel camera calls for more details and vivid photos, while the 64-megapixel camera stays low on the saturation part. Although, both devices are inclined towards the saturated output. But, this isn’t the difference that is necessary for the extra spending. You can have a look at this in the below-mentioned camera sample folder.

The rear cameras do a fairly good job. The colour reproduction is a bit processed but didn’t feel over-the-top. This is quite visible in the case of bright colours. The Pro colour option is meant to add the ‘punchiness’ to an image. But, it mostly ends up increasing the saturation level. For images taken in yellow light, it’s quite prevalent. The main camera also gives reddish tones to humans, which was also noticeable in the Redmi Note 10 Pro Max. The ultra-wide lens is quite apt to capture a wide area. However, the output feels stretched and thus, loses out on the details to an extent. There is also a sense of colour-shifting but unlike many ultra-wide lenses (even the one on the Realme 8 Pro), this one isn’t too noticeable. 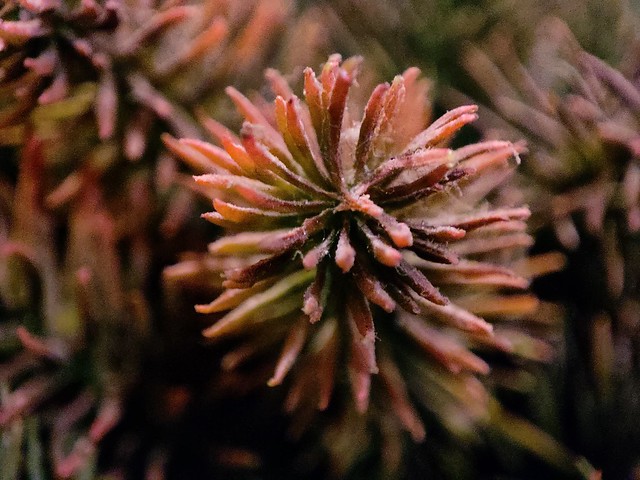 The depth sensor is pretty decent for it can take the bokeh-ed photos that don’t appear too processed. Out of all the cameras, the macro lens is the one that is my favourite and can become yours too if you like macro photography for the macro shots are quite vivid and detailed. This gives out quite an awe-worthy output.

Among other things, the Night mode is decent enough to capture details without much graininess in low light. The front camera is able to produce detailed images, although, there is some colour processing. You get to choose between the normal and beauty mode. This is where Xiaomi has shown some improvement. It was able to showcase some of my blemishes when the beauty mode was disabled. Enabling it, helps you get rid of them digitally. This way, it can appeal to a number of people equally.

As for the videos, the colour output was like the one seen on the still images taken from the main cameras. The stabilisation (with the help of the Steady mode) is decent. However, they aren’t as detailed, especially when you record indoors.

The Redmi Note 10 Pro gets a Qualcomm Snapdragon 732G SoC to do all the work. This is coupled with two RAM/Storage options: 6GB/64GB and 8GB/128GB. We got hold of the latter option, which was just apt for me.

The 732G chip allowed for most of the tasks I threw at the device. I mainly used the phone for playing games, going through social media apps, clicking pictures, and much more. I was also able to watch videos, window-shop, and more tasks with ease, without any hassle. There were hardly any hiccups.

Gaming was decent too. I am trying my hands on different games lately and the Redmi Note 10 Pro was able to handle them all well. Titles such as Genshin Impact and Asphalt 9, which are popular graphic-intensive games, called for decent gameplay without any significant battery drop in medium settings. Games such as Temple Run 2 and Criminal Case were fun to play too. But, there were some heating issues during the gameplay and even while using the camera. The battery department is where the Redmi Note 10 Pro stood out. The 5,020mAh battery lasted me more than a day on a single charge, even when AOD is enabled. And standby is pretty great: The phone will maintain being alive on a single charge for more than two days. The 33W fast charging is good too and is able to recharge the phone in about an hour or so. This matches well with Xiaomi’s expected charge time. But could have been faster, considering the competition such as Realme has raised some high hopes and I, in particular, expected a lesser charging time. I hope Xiaomi looks into this and excels in this department too.

With the Redmi Note 10 Pro, I entered the Xiaomi realm after almost three years only to be surprised by the improvement leap MIUI has taken. MIUI 12 based on Android 11 has certainly got cleaner and simpler with time. Nice job, Xiaomi! You get good customisations, the iPhone-like Control Centre, and more, all call for streamlined usage.

But, the constant GetApps notifications bothered me. Although, it might never bug many out there. During my usage, I encountered lock screen ads, which amused me for I had disabled them. But, there is one more step to it: you need to disable ‘Glance for Mi’ via the Settings and once that happened, the ads were a no-show.

MIUI does give a lot to handle in one go but once you get used to it, the UI is pretty convenient to use after all.

The stereo speakers are quite a good addition as they ensure a clear audio experience. The fingerprint scanner is quite snappy and while you may take a while to get used to the pressing scenario, it just ensures safety, which is always welcome.

The Redmi Note 10 Pro, at a starting price of Rs 15,999, is currently the budget phone that has it all. You get a pretty good-looking phone with a good and smooth display experience, some decent camera performance, and a battery life that will help you through both easy and rough times.

But then, beauty with flaws is a myth. The Note 10 Pro is an example. The minor flaw over here is the UI. Some fixes here and there can make MIUI 12 super polished. Then, while the cameras are good, they do saturate a bit, which wasn’t to my liking. That said, this can attract most people and for them, the Redmi Note 10 Pro is a pretty good option. It is also able to give a tough competition to the Realme 8, with a good display, a rather subtle design, and good cameras.

The main question is, “Is it competitive enough to challenge the existence of the Pro Max?” And it’s certainly a Yes. The phone, except for the 108-megapixel embossment and image output, doesn’t differentiate much from Redmi Note 10 Pro Max and if you aren’t into going for big numbers, you can skip paying the extra three grand and go for the Redmi Note 10 Pro.