You Can Now Buy a Tesla with Bitcoin in the US: Elon Musk

Elon Musk, the CEO and ‘technoking‘ of Tesla, has announced that Tesla now accepts Bitcoin as a payment method. The announcement was made earlier today on Musk’s official Twitter handle. It comes after the company bought Bitcoin worth $1.5 billion last month.

According to Elon Musk, the company is using internal and open-source software to operate Bitcoin nodes. In addition, he pointed out that Bitcoin paid to Tesla will be retained as Bitcoin and will not be converted to fiat currency. Take a look at the announcement tweet below.

Currently, the option to pay for Tesla electric cars by Bitcoin is limited to the United States. However, Musk promises that the payment method will expand to other regions outside the U.S. later this year.

Pay by Bitcoin capability available outside US later this year

To initiate the payment, all you have to do is scan the QR code on the payments page or copy and paste the Bitcoin address and the exact Bitcoin amount into your wallet. You will have 30 minutes to complete the transaction and you should send the full amount in a single payment.

If you’re in the U.S. and have questions about Tesla’s bitcoin payment method, you can take a look at the support page with frequently asked questions. For those wondering, this is how the payments page looks like: 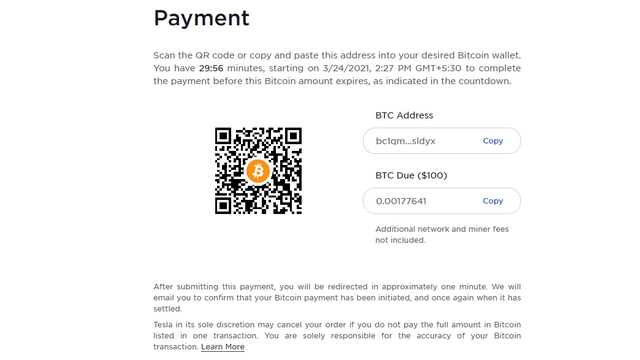 If you’ve been holding onto Bitcoin for a long time and prefer to sell some of it to treat yourself with a fancy Tesla car, you can now do it, at least if you’re in the United States. Do keep in mind that Bitcoin is the only cryptocurrency the electric car maker accepts though.